How To Find The Acts Of God Amidst The Fire

“Mrs. Fletcher, your house is on fire.”

The next few hours were a frenzy of phone calls, sirens, well-wishing curious neighbors, and even the local news van. Questions were coming at me like the flames that were licking the roof of my newly built home of 8 months. Did I have any idea how this would have started?

My husband was out of town, I had been at an event and my three kids were at our local church. I retraced my morning. Had I left the stove on?  No, the stove was not necessary for cold cereal. I was then told by a firefighter that it seemed to have started in the garage.

The trough of baby chick quickly came to mind and I realized that the heat lamp must have something to do with this. This would be confirmed as an outline of soot and ashes were all that remained.

The fire department did a great job in saving a majority of the house’s structure, but the smoke damage was more extensive than anyone imagined. Our family stayed with a close friend for a while and then moved into the mother in law apartment that a church member had available.

The following weeks were so hard. Sorting through damaged possessions, making lists, taking in the reality of what was lost and reading through insurance claim forms.  While reading through the papers I was stopped by the phrase “act of God”.

ACT OF GOD:  An inevitable accident. A natural catastrophe.

As I thought about that I became defensive of my Heavenly Father. We are blaming the wrong entity for this worlds tragedies.

What were the Acts of God that day?

If you want to know where God is when you face fires in your lives all you have to do is reflect on how He provided for you during that time.

I know exactly what the Acts of God were during that time.

Those are the Acts Of God, that is where God was that day.

Photo:  Actual photo of my fire

This website uses cookies to improve your experience while you navigate through the website. Out of these, the cookies that are categorized as necessary are stored on your browser as they are essential for the working of basic functionalities of the website. We also use third-party cookies that help us analyze and understand how you use this website. These cookies will be stored in your browser only with your consent. You also have the option to opt-out of these cookies. But opting out of some of these cookies may affect your browsing experience.
Necessary Always Enabled
Necessary cookies are absolutely essential for the website to function properly. This category only includes cookies that ensures basic functionalities and security features of the website. These cookies do not store any personal information.
Non-necessary
Any cookies that may not be particularly necessary for the website to function and is used specifically to collect user personal data via analytics, ads, other embedded contents are termed as non-necessary cookies. It is mandatory to procure user consent prior to running these cookies on your website.
SAVE & ACCEPT 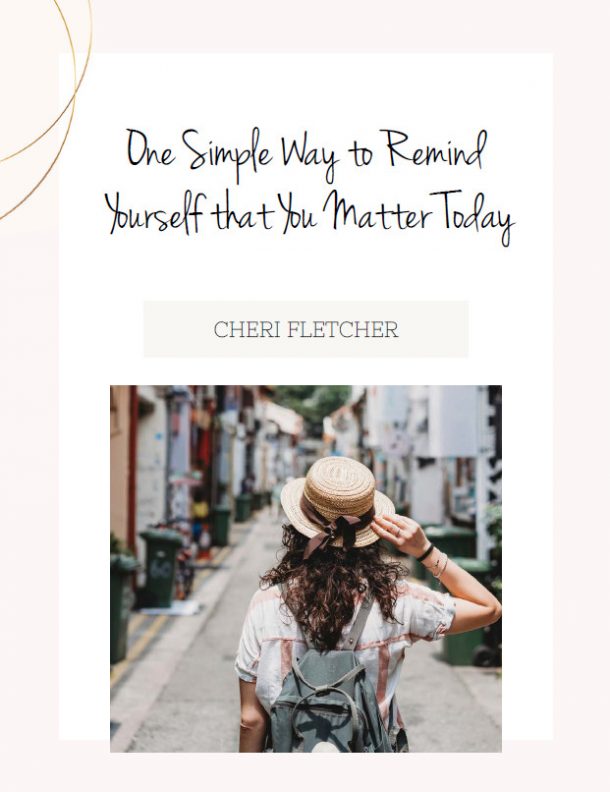 One Simple Way to Know You Matter Today

Imagine shifting your focus off the exhausting work of trying to prove yourself to the joyful life of knowing your worth!

Subscribe and get weekly podcast episodes and bi-monthly newsletters. PLUS, my gift to you, the mini-guide, “One Simple Way To  Know You Matter Today.”

I want to help you stop struggling for validation and start knowing for sure that you matter!

You have Successfully Subscribed!